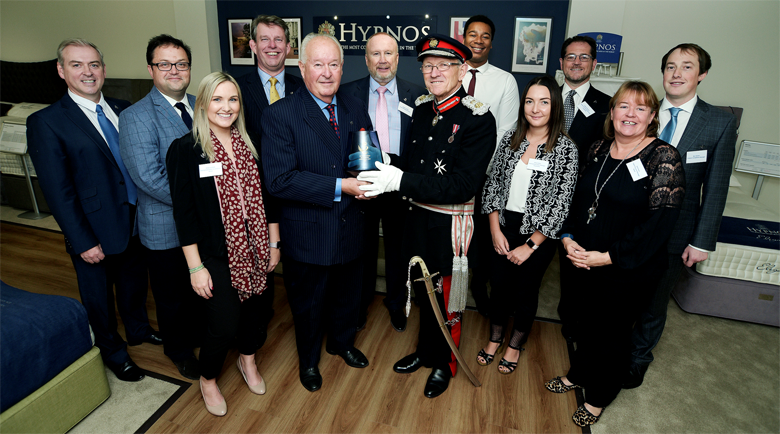 We're delighted to have been formally presented with the Queen’s Award for Enterprise for International Trade by the Lord-Lieutenant of Buckinghamshire, Sir Henry Aubrey-Fletcher.

The award, which is only granted to those who demonstrate the highest levels of excellence within their field, was presented to our chairman, Peter Keen and group managing director, Stephen Ward, at the Princes Risborough site. The award comes at an exciting time for us, which has been operating in Buckinghamshire since 1904 and now makes beds for the UK and international market, exporting its products all over the world.

The esteemed event was attended by leading figures in the community, including the Chairman and Chief Executive of Wycombe District Council, Town Mayor of Princes Risborough, Chief Executive of Buckinghamshire Business First and the Chairman of Buckinghamshire County Council, who were taken on a factory tour and saw first-hand how Hypnos beds are crafted, side stitched and hand tufted.

Speaking about the accolade, Sir Henry Aubrey-Fletcher, Lord-Lieutenant for Buckinghamshire, said: “I’m delighted to present The Queen’s Award for Enterprise for International Trade to the team at Hypnos. The award is in recognition of their hard work and substantial growth in international business and overseas sales and export activity and it’s great to see family-run businesses in Buckinghamshire being recognised in this way.”

Peter Keen, Chairman, added: “To have been officially presented with the Queen’s Award for International Trade by Sir Henry Aubrey-Fletcher, was a true honour and a remarkable occasion for all the staff at our head office. It is certainly a day which will go down in the business’s history and be remembered for years to come.

“This accolade is widely regarded as one of the most significant honours a business can receive and we’re extremely proud of this achievement and all the hard-work that’s been put in over the last few years. We’ve come a long way and have invested a significant amount of time in growing and developing our global footprint to secure a strong international position.”